We all know that COVID-19 has meant a changing world. A surprising knock-on effect has been how certain industries are adapting to a virtual home. Theatre, music and cinema have all found a new home on the smaller screen - which just might last.

Ultimate investigates how adapting to a new situation might transform one of the UK's best-loved industries: the arts.

Let’s put it bluntly - it seems like there’s still a lot we can’t do right now. Though some things in  our lives are beginning to return to a new normal after the onslaught of COVID-19 (like having your hair cut by a professional, instead of your scissor-wielding spouse) the truth is that today, here in the UK we’re still restricted on certain public activities. From cinemas to concerts, many of our most-loved activities have been put on the back burner, as governments seek to control the spread of the virus with social distancing measures.

Unfortunately, this has seen pretty staggering cuts to the UK's rosters of theater, cinema, and concerts, as culture-vultures have found their entertainment schedule pretty limited these days. It’s not all bad news though - some inspired creative geniuses have decided to take matters into their own hand (well - screens). Using video-conferencing technology like Zoom, Microsoft Teams and Google Hangouts, certain directors, actors and musicians have decided to perform their concerts and plays on their own, virtual stages, with links to virtual viewings on the web taking the place of seat reservations. An inspired idea for a socially-distanced, 2020 audience - but does it work, and will it stick? Ultimate looks at the changing tide of creative tech.

Take your seats (at home…) 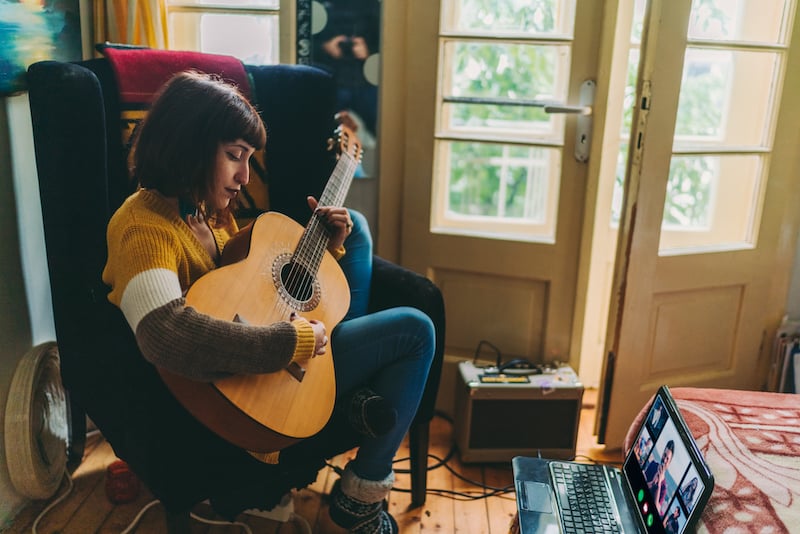 Until just days ago, indoor theatre performances were prohibited on the grounds of stopping the spread of COVID-19. This understandably caused much consternation for theatre-goers and performers alike with many concerned about the fate of the art.

The National Theatre and other well-known theatre companies decided to make the most of technology available; streamlining the much-loved physical art of acting into a service, a bit like Netflix or Amazon Prime. The National Theatre made many of their previously-recorded performances available to stream for free, letting the public enjoy truly spectacular shows without it costing them a penny.

For those committed to the realities of seeing a spectacle live, however, Zoom Theatre describes itself as ‘live theatre for our times’. It is, of course, the concept of performing a play over Zoom with the audiences watching from home, with shows designed and choreographed specifically to suit a screen-centric play. Audience members are encouraged to leave their microphones un-muted (in a move guaranteed to shock the polite work-from-home crowd) in an attempt to replicate the noise, bustle, and of course, applause of the venue. After all - the show must go on, right?

The concept of a digital stage is one that musicians and comedians have become accustomed to during lockdown, too: online gigs have become a great way for those breaking into the music and comedy scenes to get their names out there, as well as honing their skills on the virtual circuit. These Zoom-based performances have allowed new life to breathe into an industry in peril - as well as providing some much-needed entertainment for those of us stuck in the same four walls!

Certain cinematic releases due to appear on the big screen are making their way onto smaller ones, too:  production companies left in the cold by COVID-regulations have changed the face of modern cinema, by partnering with streaming sites like Hulu, Netflix and Amazon Prime to break out their new releases. Powerhouse Universal Pictures decided that films either newly in cinemas at the advent of the coronavirus outbreak or scheduled for cinematic release during lockdown would instead be released on streaming / VOD sites for a membership fee. Missed the Austen adaptation of Emma in February? No worries - join Amazon Video and enjoy the small-screen version without paying for popcorn?

Could the change be permanent?

Indeed, there’s obviously benefits for the consumer to these digital adaptations. No queues, total accessibility (if you’ve got WiFi, that is) and avoiding the spiralling costs of theatre, concert and cinema tickets of the last decade. Could these changes outlast the coronavirus? The virus it seems, has already changed the way we work, shop, and even order a coffee - perhaps a change to the global arts scene is on the horizon.

On a more realistic note, what these examples do show us is how embracing technology can transform the way that whole sectors operate - and how expanding your horizons to include a digital future can save an industry from almost-certain collapse. Even if these digital stages and home cinema options are rendered unnecessary, by the reopening of cinemas, theatres and indoor concert venues, those companies and individuals who expanded their reach into virtual worlds made the most of capturing an audience’s attention during a quiet cultural moment - and as a result are still being talked about; shared, and remembered.

Could a virtual version of the arts exist past COVID-19? Maybe, but we can’t say for sure. However, is it always worth reassessing your industry, even if it seems poles apart from new technologies, to see how you can adapt and stay relevant? At Ultimate, we think the answer’s a resounding yes.

Written by Cia Risbridger August of 2020