With hundreds of millions of tweets posted every day, it’s likely that your business’ Twitter marketing will be lost in all the noise. In order to resolve the problem of marketing messages falling into obscurity, many businesses use Twitter ads to boost their brand-reach and position their content in front of users who are most likely to be interested in their products. 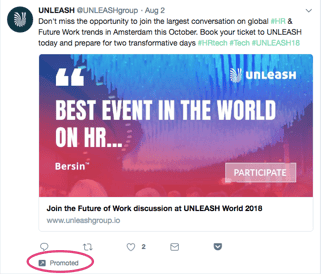 Twitter’s data demonstrates that ad engagements increased 69 percent over 2017, so it's advisable that your business takes advantage of Twitter Ads to nurture and generate more leads. Twitter also offers ultra-simple ad formats which are understandable for users who are novices in the world of social media marketing. This guide will hopefully give you a great insight into how to use Twitter for business.

In order to set up an ad you will need to set up a Twitter Ads account and to set an objective for the particular campaign you are running, whether it be boosting tweet engagements (retweets, comments), awareness (you want people to see your promoted tweet), increase followers, increase follow through clicks onto your website or promoted video views.

In order to select an objective, it helps to have defined social media marketing goals. What are you trying to achieve by advertising on Twitter? Your goals need to be SMART. This means your goals are specific, measurable, attainable, relevant and timely (have a set time period). You may have specific goals that are relevant to your marketing strategy on Twitter, which may differ from your advertisement strategy on Instagram. This divergence will happen naturally due to the different audiences who use each channel and the platforms’ different features. Ask yourself, how are you going to use Twitter to expand your business?

By selecting an objective, Twitter will determine which engagement types and actions are best suited for your objective.

Alternatively, if you would rather avoid the hassle of setting an objective, use Quick Promote. This is a new service offered by Twitter Business. Quick Promote is a feature that is perfect for when you want to promote an event, or want to spread the word about your latest promotion whilst on the move. Quick promote allows you to create an ad, just by clicking on the activity icon of a specific tweet on your timeline or activity dashboard. Select a budget for the ad and you’re good to go.

Set up your Ad Group and Bidding

An ad group is a sub-category of your campaign. For your first Twitter ads campaign, you’ll probably want to stick to one ad group. However, as you become more confident and learn how to use Twitter for business, you can split up the campaign to target different audiences, use a range of creative, or test different budgets and timing. This kind of testing will allow you to optimize your Twitter ads and make the most out of your spending. 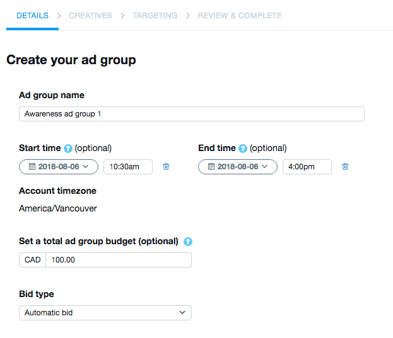 Next, you’ll need to decide how much you’re willing to pay for each interaction (tweet engagement, video view, etc.). This is a bid. You can set your bid higher to make sure your ad is seen more often, by a greater number of people. Or you can bid lower if the engagement is worth less than the amount Twitter suggests, which is a way to decrease costs. However, if you bid too low or are out of the range, your ad won’t be seen at all. It’s a good idea to check the bid range regularly throughout the campaign. If more people bid, the range can go up, so if your bid is too low, you’ll no longer be in the range and ultimately your market messaging won’t get through.

Alternatively, if you choose automatic bidding, Twitter will automatically set your bid to get the best results at the lowest price based on your budget. This is a good way for new Twitter advertisers to get started and learn how Twitter ads bidding works.

Twitter offers a number of targeting options to enable you to choose the right audience for your ad and maximise your budget. This includes demographic targeting as you define your audience by gender, age, location, language, and technology. The geographic targeting offered by Twitter Business can be as particular as a specific postcode, or as broad as an entire country, whichever is most relevant. The technology component allows you to target by device, carrier and more.

The section entitled Audience Features in Twitter business accounts allows you to target based on specific user characteristics like events, interests, and behaviours, and even the specific keywords and TV shows users tweet about. To help you with this, the interface provides an estimated audience size that alters as you add more targeting options to your campaign.

Promoted tweets are simply tweets that an advertiser pays to display to people who are not already following them on Twitter. Just like regular tweets, these messages can be retweeted, liked, and so on. They look very similar to ordinary user’s tweets, except that they have a small label underneath which states “Promoted” indicating they are a Twitter business ad.  This is similar to Facebook ads, where the post will contain a small identifier announcing it is as a paid advertisement, stating ‘Sponsored’.

Twitter Promote Mode allows you to take advantage of automated ads, particularly useful when you are just starting to get your head around social media advertising and Twitter ads. Twitter charges a fixed fee of  £79 per month, plus tax. Once you turn Promote Mode on, your first 10 tweets each day are automatically promoted to your selected audience, as long as they make it past the Twitter quality filter. Twitter’s quality filter lists a number of requirements for ads and prohibitions. Twitter dictates that ads should including images of sufficient  editorial quality, should accurately represent the product being promoted and should not include sensationalised language or misleading calls to action.

If you wish to find more about other channels to promote your business, such as Facebook business, click here.