On the first day of Christmas Mapway sent to me:

A festive tube map for free

Mapway’s widely used public transport apps cover 23 of the busiest cities across the world and they’ve been downloaded over 33 million times, making them a market leader. The apps help passengers plan their journey, check for the latest information and avoid those perennial delays. Sadly for Santa, Mapway hasn’t quite got around to making a map for sleighs but they are getting into the festive spirit with a few seasonal treats! 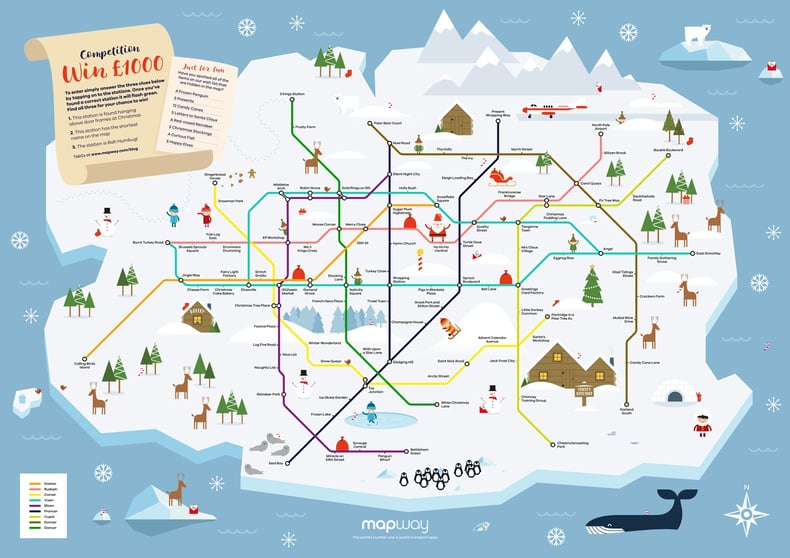 Mapway approached Ultimate with two briefs for December: a Christmas-themed transport map and a ‘12 Days of Christmas’ countdown. We loved the concepts and snapped up the opportunity to sprinkle a little bit of Christmas magic.

Our seasonal map uses the iconic imagery of a traditional tube map to outline an imaginary transport system on Santa’s frozen floating home. Traditional station names have been replaced with festive alternatives such as ‘Brussel Sprouts Square’, ‘Garland Grove’ and ‘Arctic Street’, on 9 lines, named after Santa’s reindeers. Hidden amongst all the cute animals and happy kids are stockings, candy canes, letters and more, for users to try and spot.

Those who access the map by downloading the Mapway ‘Tube Map’ or ‘New York Subway’ can also enter a fun competition. Users simply need to answer the three specified clues by tapping on the correct stations, within the app. The player knows they have the right answers if the stations flash green and a pop-up window appears - an enjoyable way to get passengers involved with the Mapway brand. The map has proven to be hugely popular with passengers, racking up 3,000 competition entries in the first 3 days!

The second idea Mapway presented us with focused on a ‘12 Days of Christmas’ countdown, in which a new gift, transport titbit or Christmas hack would be revealed to users each day. Ultimate had a look at other online countdowns and felt confident that we could produce something stand out for the brand. Alongside the bright graphics, in Mapway’s brand colours, we added hover animation to make the experience just that little bit more fun and engaging. Given the nature of the countdown, we wanted to ensure that people were drawn in and willing to return to the site the following day.

Feedback on both elements has been hugely positive with some wonderful social media comments. The app has even been added to Google Play’s ‘Fun and Festive’ collection!

Written by Charlotte Green December of 2016