Matt reflects on his triumphant achievement, as the professionals ride the same road as him...

If you managed to watch Saturday's stage of the Tour de France (Stage 20 on Saturday 23rd July) you will have witnessed the incredible scenes and physical suffering of the world's most elite professional cyclists taking on some of the most famous mountain climbs in the history of the race.

Well, earlier in the month on Sunday 10th July, I embarked on a challenge of a lifetime. Taking on the very same stage of the race. A dream of a challenge and one I'd been preparing to tackle for over a year or so. Being a self-confessed cycling fanatic and obsessed with following the professional sport of cycling, anyone who knows me well will understand why riding the Etape du Tour, one of the toughest alpine stages of this year's Tour was an opportunity I couldn't turn down.

Accompanies by riders from no fewer than 62 nationalities, I embarked on the mountainous 125 kilometre stage from Megeve to Morzine. The route was under race conditions, with the roads entirely closed off to traffic and included three legendary alpine climbs. A total of 2,873 metres of elevatin were on the agenda and I couldn't wait to get started.

Getting started on race day wasn't a problem. Getting to France the day before however proved a little more challenging, as I managed to miss my flight from Manchester to Geneva. It's a long story but I now realise that travelling through a security tight airport with bike boxes and luggage takes patience and atleast three hours!

At last we had arrived! I was living my dream of being a pro-cyclist, with the only different between me and Chris Froome being the 4 pints of Kronenberg, the bottle of red and the cheese board I consumed the night before the race (in the UK, a hangover is respected in the peloton). I don't think Dave Brailsford allows such activities, but the group I was with were quite insistent that it would help us on the day. 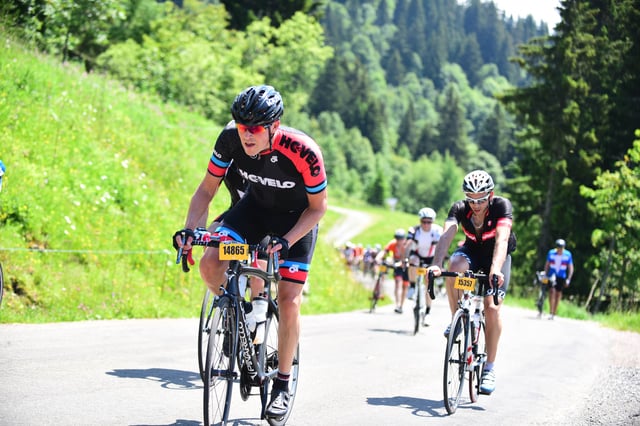 Matt on one of the killer climbs. The Mow Cop hill training paying off.

On arrival at the starting line, one thing that struck me was the sheer beauty and scale of the Alps. We've all seen the images in travel magazines of sweeping alpine roads, wooden chalets, ski lifts and pine lodges, but somehow I thought that the reality must be rows of Holiday Inn and Radisson Blu hotels out of shot. But no, the Alps are exactly as you imagine. Stunning.

It was such a shame that the pain and suffering that was to follow somewhat muted the beauty of the surroundings. We were off! But after just 20 kilometres I had a pretty major mechanical issue with my back wheel locking up. Luckily I was able to limp to a service point 5 kilometres further up the road to where the Mavic mechanics tried for 25 minutes to repair my wheel. Lots of pigeon French and hand signals from me ensued, with the final outcome being that they were unable to fix the issue and swapped my wheel for one of their own. All very pro cycling, if you know what I mean.

Anyway, I was back on the road and climbing the first of the three major climbs on the route, the Col des Aravis whcih elevated to 1,487 metres. I was thankfully feeling strong and summited with relative ease, which meant I could take in the stunning views as it climbed higher and higher. Next to come was the famous Col de la Colombiere to 1,618 metres. This climb started well but gradually drains the energy from your body, as it gets steeper and steeper, and hotter and hotter!

Descending the Col de la Colombiere was incredibly technical, but exhilarating. I witnessed some hirrific crashes as fellow riders took risks and speeds a step too far. There were ambulances everywhere and an Air Ambulance hovering into position overhead as they tried to airlift one poor cyclist off the side of the mountain who was very badly injured. 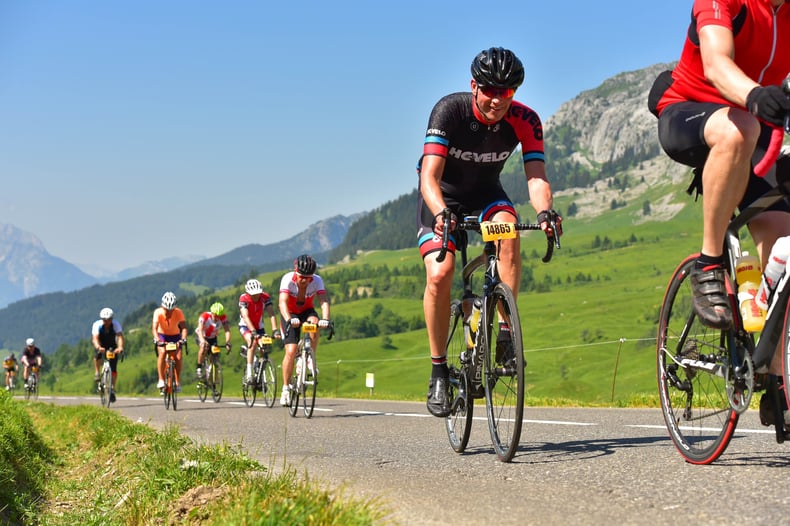 Next to come was the climb everyone in the riders village had been talking about. The Col de Joex Plane, one of the most famous and brutal climbs in the Alps. At a length of 12 kilometres at an average gradient of 8.5%, this picturesque climb is a wolf in sheep's clothing. Beneath the exterior is a climb worthy of its fearsome reputation. Renowned for Lance Armstrong undertaking some of his most famous battles (I know we don't dwell on the Big Tex too much these days), he once suffered a day he called his "worst I've ever had on a bike", losing two minutes to Richard Virenque in a matter of five kilometres after he was dropped on one of the steepest 13% sections.

I can honestly say that the Col de Joex Plane was one of the toughest things I have ever done. Relentless and unforgiving in every way. It never let up at any point, only getting steeper and steeper as the temperature rose to over 36 degrees. When the last 2 kilometres of the climb finally arrived, it increased to 10% as many cyclists around me were literally coming to a standstill and topping over sideways with their feet still clipped into their pedals. The relief when I finally hit the summit was unreal. I'd been training on climbs in the UK, like Mow Cop (25% in parts) and thank god I had.

Following a rapid descent into Morzine I came across the finish line elated. The support along the roadside was incredible. Crowds of spectators in every village and town cheering us on, banging cow bells and blowing whistles. The real Tour experience.

The sponsorship I'd received from so many very generous friends and clients also spurred me on along the way, and I'd like to thank everyone who has donated or put up with me talking cycling sh** for the last 12 months :-)


Written by Matt Townsend July of 2016