The 'Christmas Creep': Part Of Your Marketing Strategy?

The Christmas Creep is upon us!

I can't believe they’re selling Christmas stuff in September. Yes, that's right, I’ve seen Christmas chocolate (Terry’s Chocolate Oranges are back to £1),  decorations and trinkets all flying into the shops...in September. Now, I'm not the Grinch, but I don't get excited about Christmas until December (maybe that's just me…).

However, this isn’t a new phenomenon. In fact, most retailers and businesses start their Christmas strategy as early as possible to take advantage of the (very profitable) holiday season. The start of last week saw the ‘100 days until Christmas’ countdown - and companies are starting to tell you about it. Selfridges have opened their Christmas store already...a mere 149 days before Santa arrives!

Christmas is everywhere! But why?

The 'Christmas Creep' is a term used since the 1980’s, to describe the act of retailers sneaking Christmas products onto the shelves as early as possible. Retailers and other businesses make most of their money during the cold seasons, and want to increase their profit earlier in the year. Additionally, businesses want to introduce the prices of their products early and before their competitors, as giving consumers the information early and knowing what their preferred stores have in stock helps them to make a purchase. This has also been helped along by the rise in popularity of American traditions Black Friday and Cyber Monday mean that customer spending happens a lot earlier in the year. In fact, a 2018 survey showed that in October, 63% of shoppers were hunting for ‘early deals’ in the (long) run-up to Christmas!

It's not just retailers who take advantage of the Christmas Creep. The Air Balloon pub in Bristol has received notable media coverage for being the first pub in Britain to display a Christmas tree. Sounds crazy, sure - but the pub has received great PR, and managed to get the nation’s attention, never a bad thing in the run-up to the festive season! 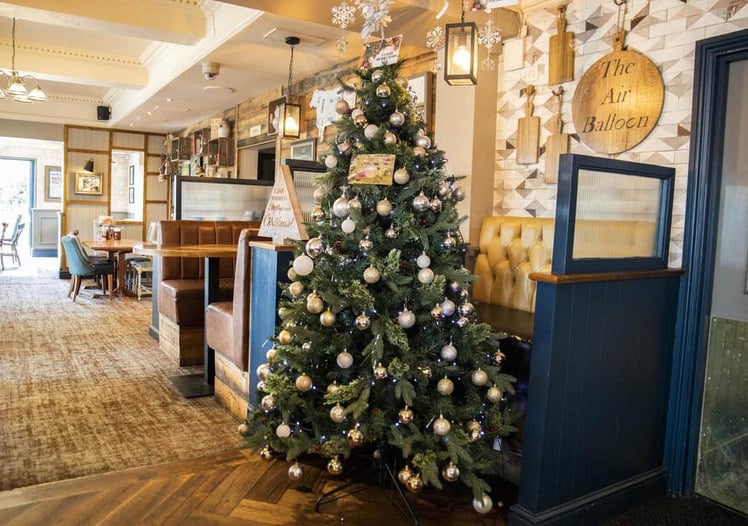 It seems that all businesses, no matter their remit, should start considering what they can do to push sales in the run-up to Christmas. Getting your clients or customers to think about your business as the festive season approaches, and working out the best way to promote your service or product can hugely increase your profits, as well as build a rapport with your customers. Having a strategy in-place early on in the year allows you to make the most of the retail rush that Christmas brings, without getting left behind! According to the ‘Facebook Global Holiday Study’, by mid-November, a third of the UK population have already started their Christmas shopping (and 11% have nearly finished! Now that’s organised...).

So how can you make sure to grab the attention of your target audience early on?

A good start is to find a platform on which you can interact with your customers in a non-invasive way, and make sure it’s one that can be utilised early and efficiently. Social media can be used as a perfect tool to get your consumer base thinking about the holiday season well in advance (and associating you with Christmas when they do!) Showing your consumer base that you’re prepared early on can even prompt consumers to get their gift-buying out of the way, to avoid the last-minute rush of Christmas shoppers come December. Some brands have even used online platforms and social media to poke fun at the Christmas Creep (which is of course still a way of bringing Christmas into the conversation...sneaky!)

But don’t just add a Clip-Art Father Christmas or a ‘snow’ filter to your existing promotions or deals - coming up with something original is the key to a successful pre-Christmas campaign. After all, everyone’s going to be doing it, so it’s important to make sure you stand out!

With this in mind, another thing to remember in your Christmas Creep strategy is that your consumers are likely to be bombarded early on by lots of other seasonal sales - so keep it personal. A loyalty or rewards scheme, if it applies, can help to make your customers feel valued (and break up the monotony of CHRISTMAS SALE signs everywhere...)

So there you have it - before you put your feet up in the hope that we’re still months away from the seasonal frenzy, it seems that for most of us, it’s right around the corner.

And before I forget, have a very Merry Christmas...in 3 months’ time!

Written by Josh Ellis September of 2019