If you are a follower of Google’s algorithm updates, you will be familiar with the likes of the Penguin Update, the Panda Update and many more. The most recent big algorithm update came on 1st August 2018, a broad, global and core update which is now being referred to as the ‘Medic Update’.

What is the Medic Update?

The Medic Update is one of the biggest algorithm updates we have seen from Google for a long time, affecting both organic search results and local results. The update has mostly affect YMYL (Your Money or Your Life) websites, sites related to diet and nutrition. Below are some screenshots from some diet and nutrition sites, some saw enormous drops:

Whilst others have enjoyed fantastic gains:

It seems that E-A-T (expertise, authoritativeness, trustworthiness) is more important than ever and if this has been considered in a website’s strategy, they are less likely to have been negatively affected by the Medic Update. Google states that E-A-T is among the top 3 considerations for page quality and this update highlights the importance of it.

Who is affected by the Google Algorithm Update?

As you may have sussed from the nickname, the Medic Update seems to have had a focus on health and medical sites primarily. Although the update has gained this name because of the focus on the health sector, many other websites have been affected by the updates and Google will not confirm its specific focus. Google’s advice after this update has been simple: concentrate on making your website the best experience possible for the user, offer amazing content and add as much value as possible.

Google does not always pass comments on algorithm updates as updates can be as frequent as a couple of times per day. Larger updates also occur several times per year and this most recent update is considered as a ‘broad core algorithm update’ and on this occasion, Google chose to comment. 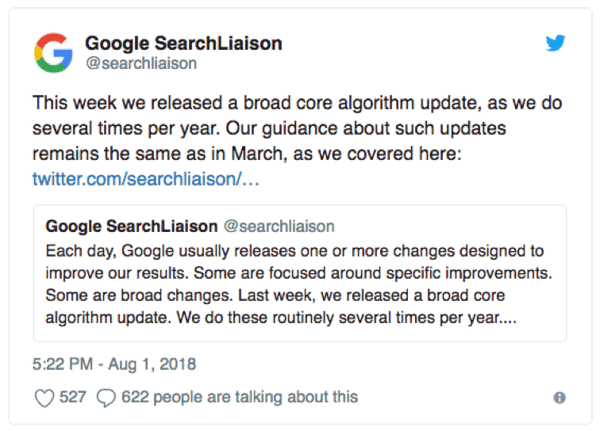 What is the fix after the update?

Google’s stance on this is that there is no ‘fix’ for the effect that the update may have had on your website but rather that you should focus on building the best website you can. Improve the quality of the content, ensuring that the website is user friendly and helps the user with their end goal. Google also mentioned that if a website’s performance has dropped as a result of the algorithm update, it does not necessarily mean that there is something wrong with your website but rather that pages that were previously under-rewarded are actually going to benefit. Likewise, if the performance of your website has improved as a result of this update, this is likely because your website wasn’t receiving the recognition that Google believes it deserved. 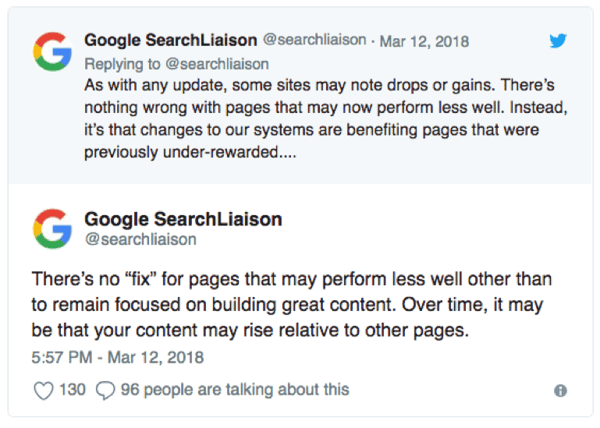 Is it only medical and health related sites that have been affected?

Whilst a large percentage of the affected sites appear to be medical and health related, there has also been a trend of ‘Your Money or Your Life’ (YMYL) websites that have been affected.

YMYL websites are, by and large, websites that ask for personal information such as bank details, driving licence information, addresses and other information that can be used for identity theft. This is as well as websites that offer advice on major life decisions, from parenting and health to decisions around purchasing and financial advice. Whilst some YMYL websites have suffered after the Medic updates, others such as Costco and Glass Door have thrived.

What should you do now?

As a result of the Medic Update, our advice has not changed. Websites should be continually bettered in their content, usability, and purpose, ensuring that E-A-T is considered in all stages of a website’s strategy. Ensure that your website fulfils its expectations and does a better job than anyone else out there.

Written by Carrie Shaw August of 2018