This summer, the Ultimate team set their sights on Manley Mere’s Aquaglide Aquapark, a wipe-out water-park assault course featuring giant trampolines, slippery balancing beams, impressive climbing walls and blast bags to jump and slide off. Last year, the Ultimate team braved the Manley Mere Adventure trail, but this time we wanted to challenge ourselves further and try something off-shore.

After a promising sunny morning, ominous grey clouds began to descend as the team enthusiastically assembled in the car park. 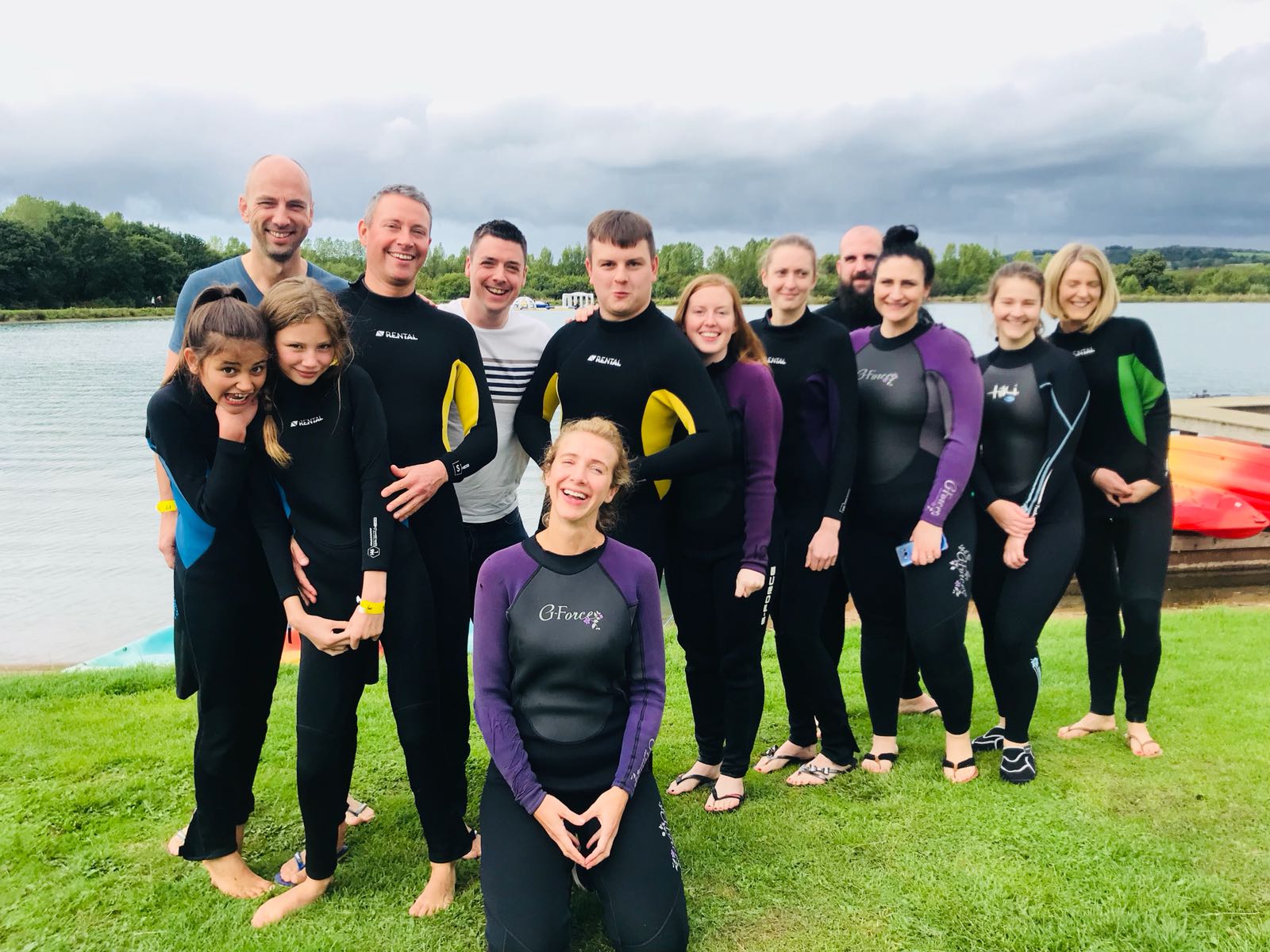 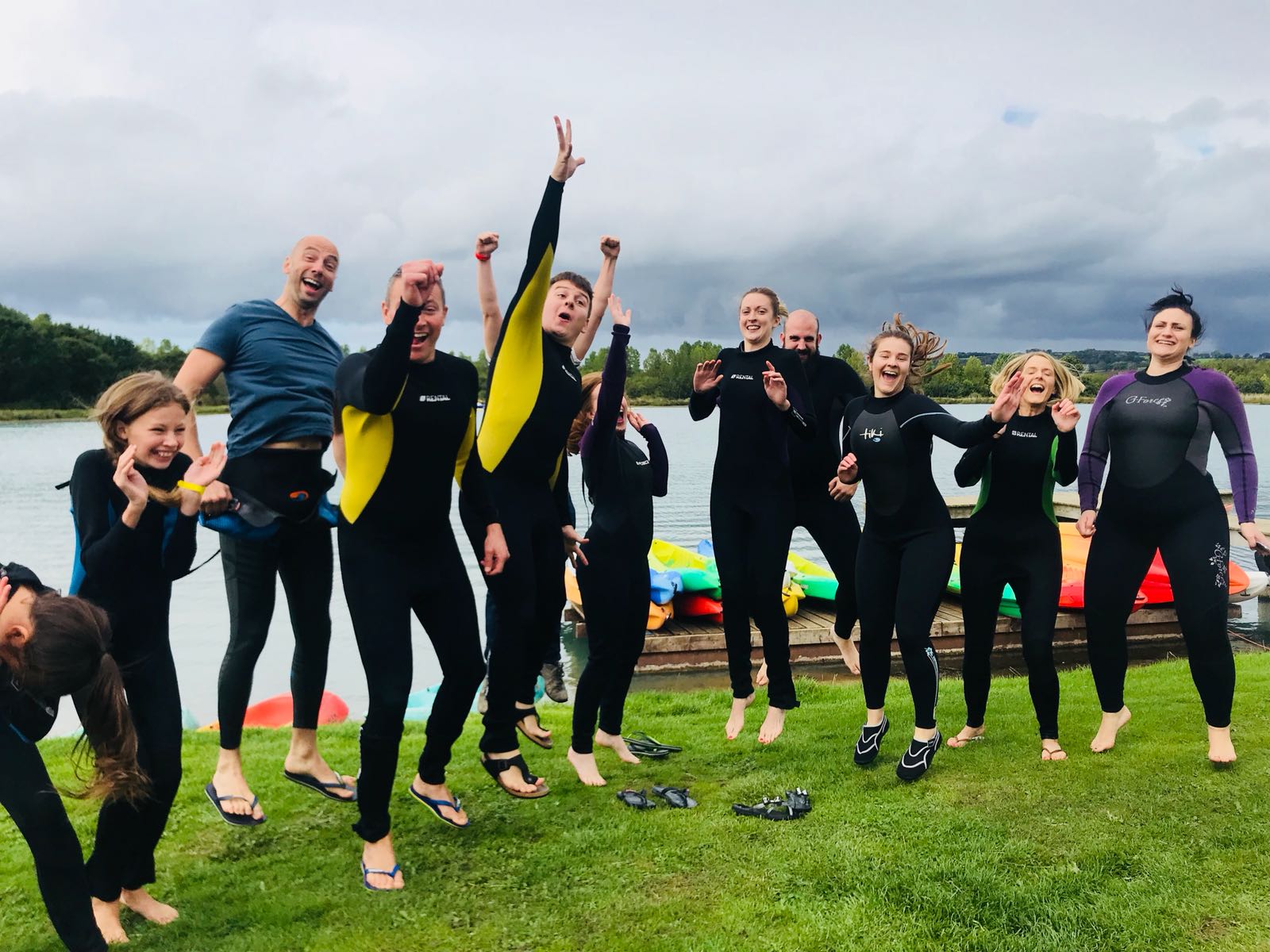 As we got kitted-out, some of the team were more disgruntled than others at having been handed an already sodden wetsuit caked with mud and worn by someone else that very morning. Smug-looking Anna and Hayley donned their own personal wetsuits brought from home, looking very keen and prepared and crucially, not shivering like the rest of the team. We all strolled off to the changing rooms and desperately wriggled into our neoprene outfits, some struggling to zip them up more than others, whilst other team members pulled at sagging material in unpleasant places. Did anyone get the right size wetsuit? However, we sprightly marched for our safety brief still eager to get started.

The Aqua Park animated safety video was as informative as it was highly amusing. However it tragically confirmed that all our ideas of blasting smaller members of the team into the sky, blocking walkways, jumping and other irresponsible antics sadly would not be tolerated by the army of whistle-bearing lifeguards. 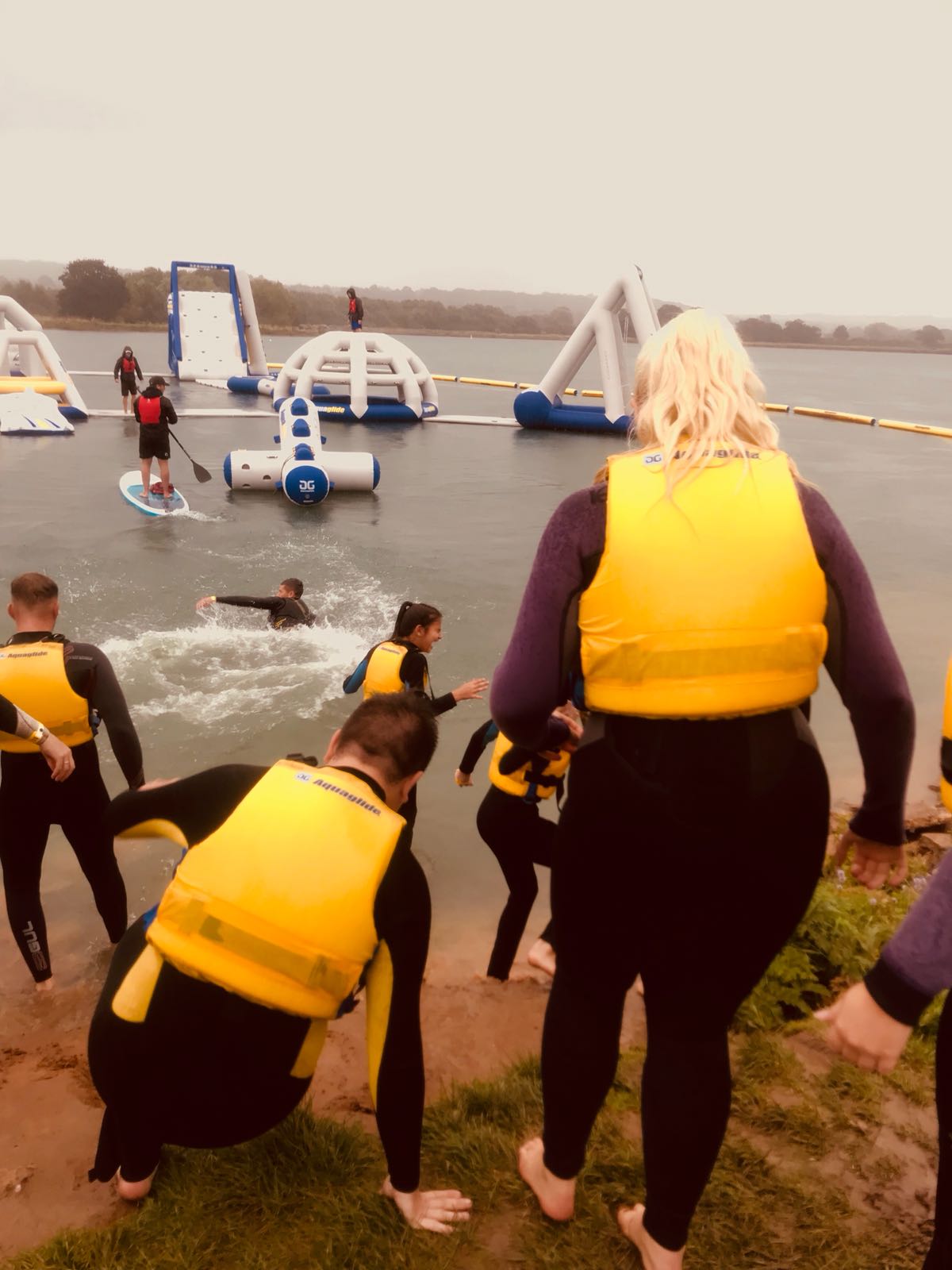 Time To Get Stuck In!

As we slid down the sandy slope into the water, some members of team were horrified to realise that the body of water wasn’t anywhere near the temperature of the steam bath at Cotton’s spa, which they had demanded as an alternative chosen activity for Ultimate’s fun day. There were quite a few girlish squeals as we stepped into the water (not just coming from Matt’s daughters Beth and Eleanor, I might add) as several limbs lost all feeling and the heavens opened with heavy rain.

Not at all put off by the rain, the team began to tackle the various obstacles. Stefan gallantly scaled the climbing wall, goading others by ringing the bell at the top (making sure everyone knew he’d managed it) before throwing himself off whilst the lifeguards watched nervously. Richard leapt like a flying squirrel, narrowly missing a horrified Anya’s head and niftily diving into the icy waters, having been thrown off the inflatable by a giggling Tom and Stefan.  Anna managed to get stuck in various, unnatural positions at different points on the course, including horizontal on the hamster-wheel and had to be helped by a sympathetic Tom and Lisa. On other occasions, Tom relished causing havoc by bouncing on inflatables in order to bounce off unsuspecting members of the team (particularly poor Lisa), whilst chuckling to himself.

I believe we would all agree that the hour session had in fact flown by and was outstanding fun. As the whistles were blown, everyone awkwardly scrambled onto dry land. Lisa’s lips were unhealthily blue and didn’t regain their proper colour until hours later, after several cups of tea and perhaps a brandy.

We hastened to the changing room and once again squirmed out of our restrictive wetsuits, happy to be in warm clothes as we retreated to the on-site café for a well-deserved brew after a high-energy session. Only hours later when we had all returned to our separate homes or even the next morning, did each member discover the various bumps, bruises and stiff limbs that came from the enthusiastic leaping, climbing and swimming that occurred on Sunday. Not before long will the assortment of injuries will be forgotten and we will be planning our next adventure. Please let us know if you have any recommendations! 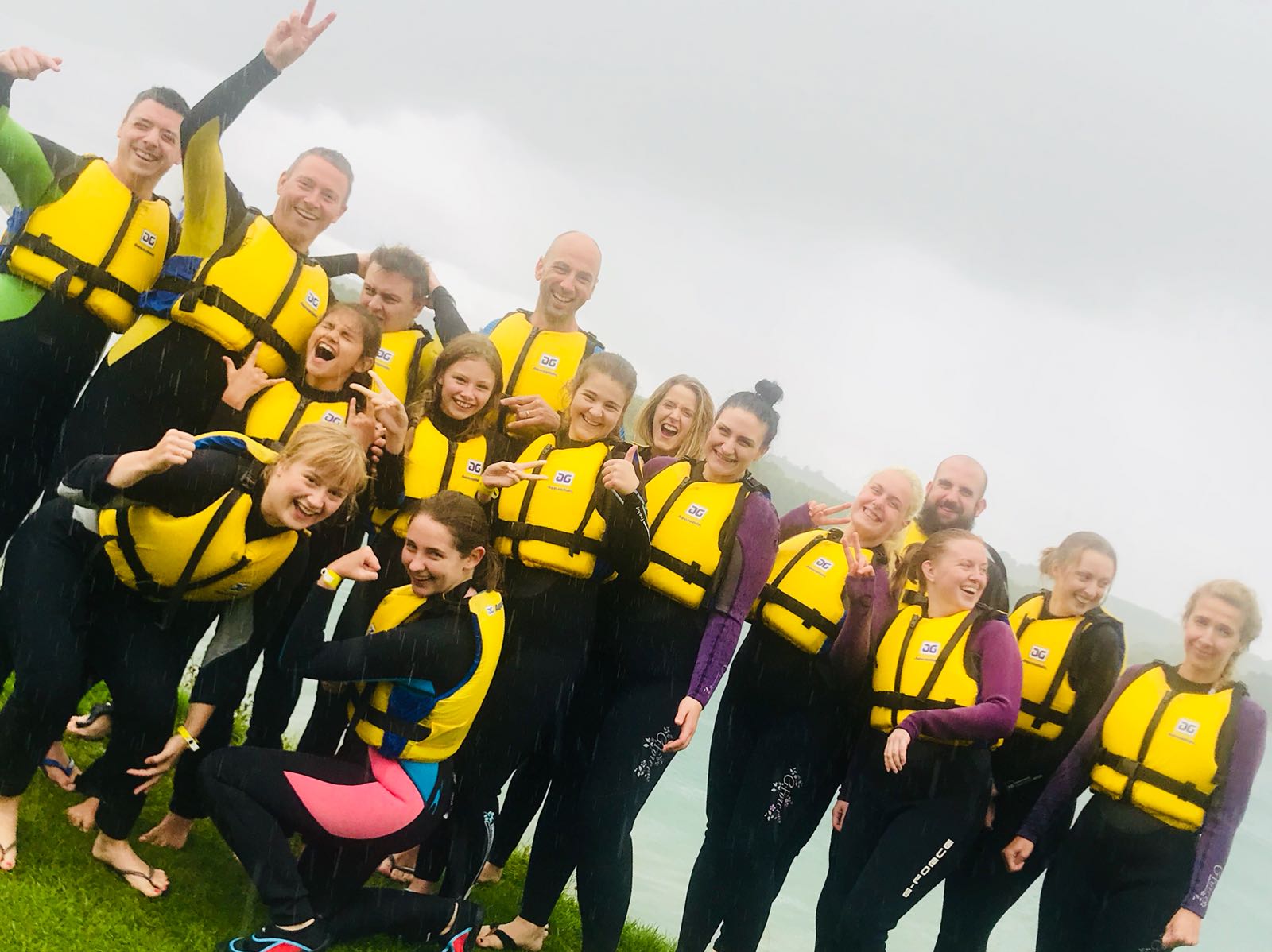