2018 has truly been a huge year for advertising and we have witnessed irrevocable changes to how brands interact with audiences, advertising is more focused on brand as opposed to product than ever before, businesses need to connect authentically with their audience and be agents for social change and championing diversity.

Here at Ultimate we have compiled a list of our favourite and most innovative advertisements of 2018, whether they be print or TV advertisements. We have praised a number of brands for a variety of reasons, ranging from careful and humorous management of a PR crisis, using outdoor spaces in an ingenious way or shocking commuters with controversy to grab their attention. Continue reading to look back on the what we think are the most daring and intelligent of advertisements that featured over the year. 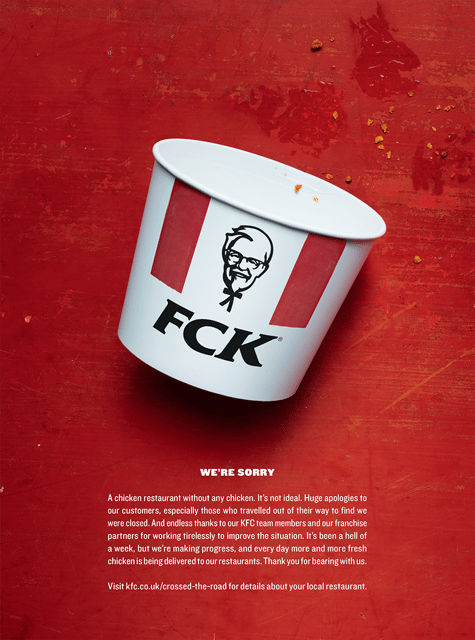 This cheeky, foul-mouthed advert came at a time of real crisis for this iconic food chain in February. The FCK advert was released when the fried chicken chain faced widespread store closures and reduced menus due to a severe and unexpected shortage of chicken owing to operational issues with their new provider DHL. This was a complete disaster for the brand and had the potential to spin into a full blown PR disaster. Disappointed fans were outraged by the issues and were so vocal on social media that Manchester and London Police forces were forced to tweet publicly to audiences reminding  them that the #KFCCrisis was not a police issue. Few things are better than a perfectly timed obscenity, as discovered by this brand.

Coming up with a sincere solution to the crisis that was on-brand (KFC is a chain known for not taking itself too seriously) presented a challenge to agency Mother London, however they responded with a stroke of genius that was hailed by some as a masterclass in PR crisis management. KFC ran a full-page print advert in the Metro and The Sun newspapers, which sincerely apologised for the ordeal while admitting that “a chicken restaurant without any chicken” is “not ideal”. The ad fundamentally grabbed readers’ attention with a reimagining of the chain’s logo, no doubt echoing the sentiments of both fast food fans and company executives to the chicken shortage, reordering “KFC” to read “FCK”.

Nike- Nothing Beats a Londoner Advert

Nike released this powerful TV advert with the aim of mobilising active Londoners with a new campaign designed to show the range of activity undertaken by people within the city, featuring familiar faces such as Skepta, Mo Farah, Harry Kane, Dina Asher-Smith and England manager Gareth Southgate.

Nike’s video content was highly praised and far reaching young people’s view of living, and encouraging them to pursue their passion in the most multicultural of cities. The short advert stirred feelings of optimism as well as ground-level grittiness owing to being filmed in 16mm and self-depreciating moments when interviewing London youth. The ad also worked to push buttons, by addressing Peckham’s sensitive historical reputation of high levels of unemployment and gang culture by questioning ‘What’s wrong with Peckham?’ which reportedly stirred mixed feelings in viewers.

The ‘Nothing Beats a Londoner’ advert was accompanied by a social media campaign #LDNR and models wearing t-shirts with the Nike brand and LDNR. Despite the advert being highly praised for it’s empowering engagement with a young urban audience it was removed from youtube owing to a nasty legal trademark battle with women’s activewear brand LNDR (we know not exactly the same) due to claims it infringed on their brand. 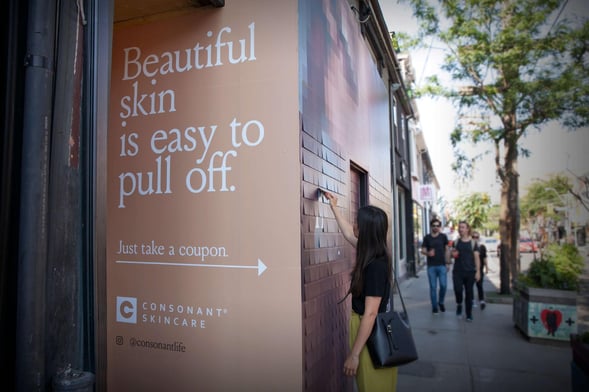 In recent years OOH (Out-of-home advertising or outdoor advertising) has become one of the fastest growing and interactive forms of advertising around. The scale, viewability and dramatic effect of outdoor advertising can help marketers to cut-through in a competitive market and capture consumer attention in a targeted location. 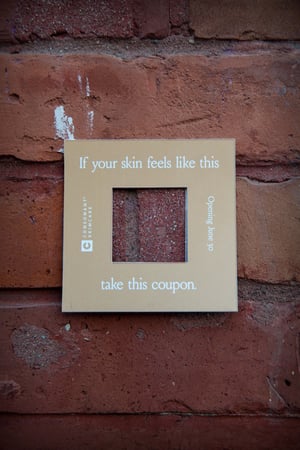 new store launch in Toronto’s trendy West Queen West by utilising the rough textures of the neighbourhood in a unique and highly instagramable way. Consonant strove to educate consumers on the best way to reveal their beautiful skin, and their messaging was truly all around them. Consonant took over the walls and signposts with a series of ambient coupons and postings

that took advantage of various surfaces found in the area, like rough brick, dry wood and cracked cement. With wording such as ‘’If your skin feels as rough as [a cutout of a brick wall] visit us on June 30." All of the different ads were of varying tones to the beautiful diversity of skin tones of Consonant’s audience. We loved how a number of the wall installations featured ingenious peel-off coupons, which people were able to use in store. 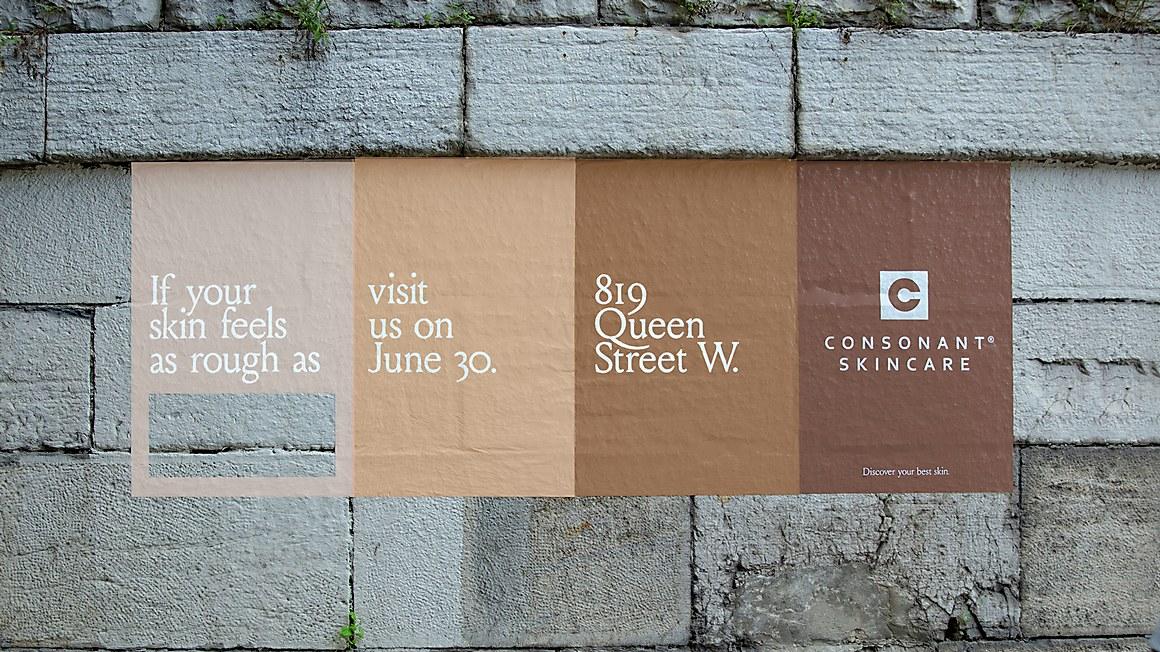 McDonald’s and the Met Office 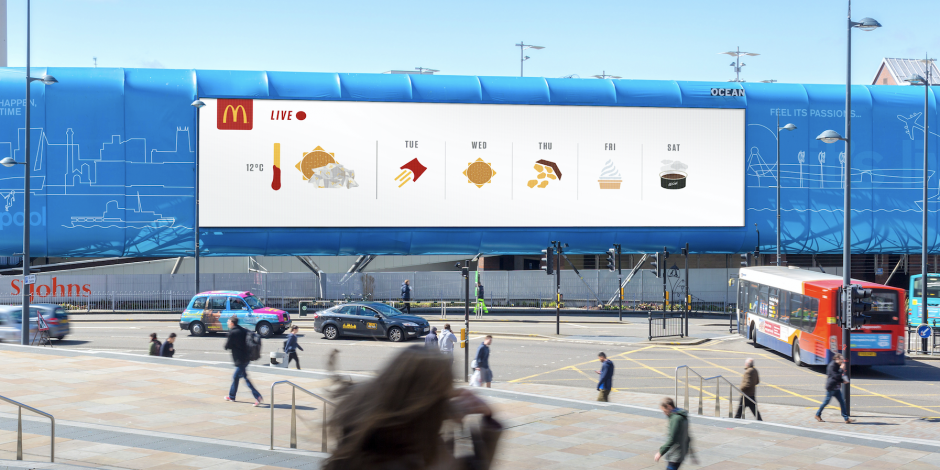 Burger chain McDonald’s teamed up with the Met Office to bring Britain’s unpredictable weather to life on giant screens throughout the country, targeting the topical conversation surrounding April’s unpredictable weather and giving viewers a charming and education insight to commuters on whether they need a brolly or extra jacket that day.

Macdonald's did away with traditional weather icons by replacing them with their own versions, based on their most popular menu items such as an unwrapped burger to represent sunshine and an upside down pot of french fries for showers. Not just a quirky gimmick, McDonald’s digital billboards updated and change based on the weather as the fast-food chain tapped into the U.K.’s Met Office to collect real-time weather data. 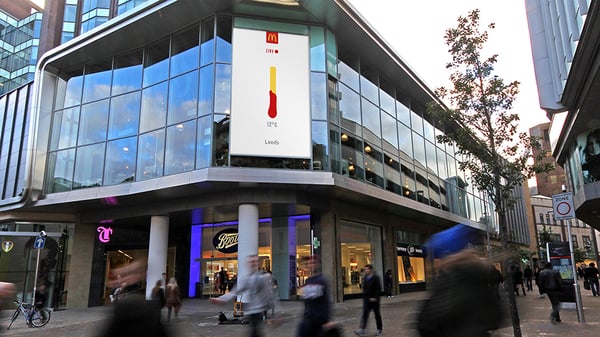 To advertise the launch of the highly anticipated season 2 of Channel 4’s gripping, dystopian drama the Handmaid's Tale, the broadcaster launched a chilling campaign which brought the oppressive and patriarchal laws of fictional totalitarian state Gilead of the series to life through impactful advertising. 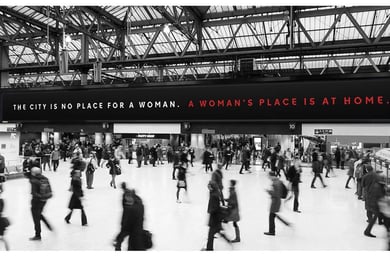 Channel 4 promoted the new series with vast billboards featuring controversial phrases such as ‘a woman’s place is at home’ and a page-spread on the metro magazine stating in block capitals ‘Women are not allowed to read this newspaper.’ The messaging of this campaign was simple, shocking but incredibly effective. We loved how Channel 4 used digital screens at Waterloo to carry these stark messages with little  recognisable branding, however then flickered to reveal the show's central character Offred holding a burning Handmaid's headdress, with the text 'Don't let the bastards grind you down', giving a tantalising flavour of the series to come and creating a huge buzz of anticipation.

We hope you've enjoyed our Best Ads of 2018 compilation, what were your favourites? 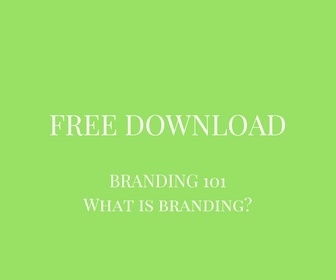 If you're interested in finding more about branding, consult our free Branding 101.

Written by Lydia Daniels December of 2018